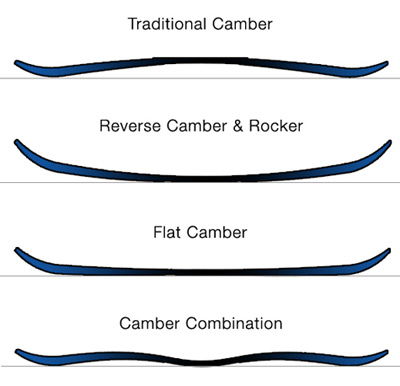 A correct knowledge of the equipment allows you to get close to snowboarding and progress quickly.
Some technical terms:

Base – The underside of the snowboard designed to glide across the snow. It is typically extruded or sintered.
Camber – The amount of space beneath the center of a snowboard when it lays on a flat surface and its weight rests on the tip and tail. Camber gives a board spring and pop on groomed runs. Reverse camber or rocker is the opposite of camber where the weight rests on the center of the board, rather than the tip and tail when laying flat.
Detune – The process of dulling the edges of the snowboard. Most people detune the edges around the nose and tail so they do not catch in the snow.
Directional Stance – A snowboard stance allowing one to ride differently in one direction than the other. In other words your bindings are mounted on the snowboard so the distance between the nose and the front binding is different from that between the tail and the rear binding. With your bindings set this way, you would ride more easily in your preferred direction (being goofy or regular).
Duckfooted – A stance angle in which the toes are pointed outward like a duck.
Edge – The smooth metal edges that run the perimeter of the snowboard.
Effective Edge – The length of steel edge on the snowboard that comes in contact with the snow when making turns. It is the effective part which is used to make a turn. A longer effective edge makes for faster riding, while shorter effective edge makes boards easier to turn and spin.
Fakie – Riding backwards or with your non-dominant foot forward. Also referred to as ‘riding switch.’
Rocker – The opposite of camber. When placed on flat ground, the center of the board between the bindings comes in contact with the surface while the board’s nose and tail rise off the ground. Often used on boards engineered for powder, park or beginners. Many variations of rocker exist.
Sidecut Radius – The measure (usually in cm) of the circle radius to which the sidecut of a snowboard corresponds. The smaller the number, the quicker and easier a board will turn. A higher number results in the rider’s ability to ride faster.